Project STEAMonEdu was presented by Achilles Kameas during the 1st STE(A)M IT co-creation workshop on integrated STEM education, which was organized in the context of 38th Science Projects Workshop in the Future Classroom Lab. The event took place on 28 February 2020. 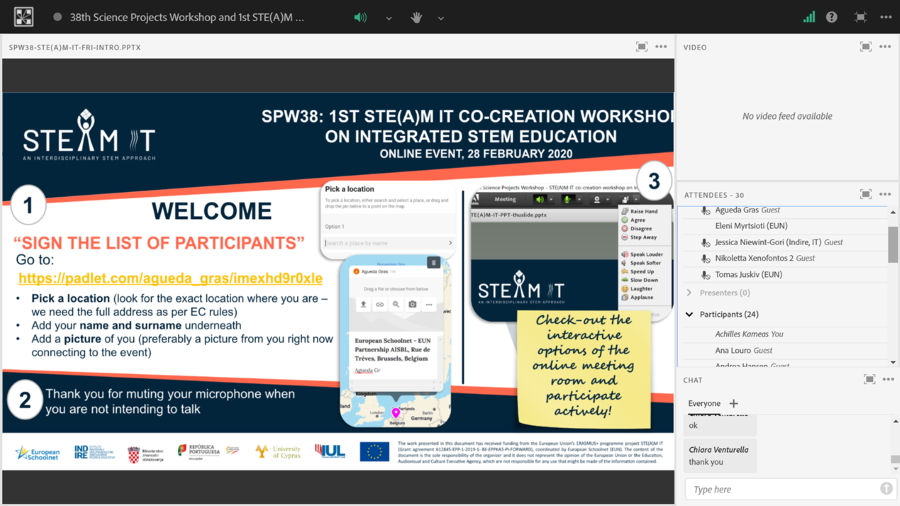 The STE(A)M IT project aims to (1) create and test a conceptual framework of reference for integrated STE(A)M education; (2) develop a capacity building programme for primary schools teachers and secondary STEM teachers, based on this framework, with a particular focus on the contextualization of STEM teaching , especially through industry-education cooperation, and (3) further ensure the contextualization of the integrated STEM teaching by establishing a network of guidance counsellors/career advisors in schools promoting the attractiveness of STEM jobs to their classes.

You can find out more about the STE(A)M IT project:

More than 45 participants, mostly teachers and educational policy makers, from several European countries and Canada joined online, watched presentations, exchanged chats and participated in online surveys. Interesting results came up regarding the challenges and problems faced, among others, when trying to put STE(A)M education in practice or when attempting to assess what the students have learned. Other important topics were how to connect STE(A)M education with real-life problems and how to persuade students to pursue STEM-related careers. 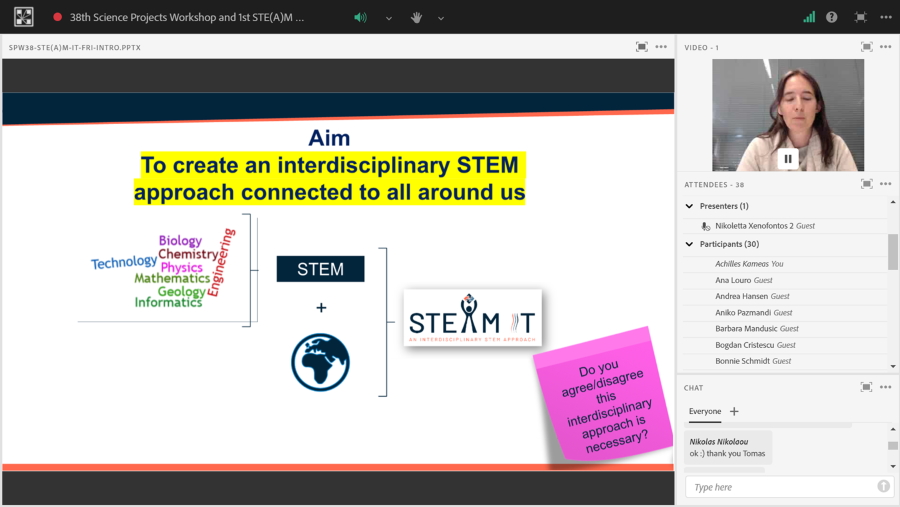 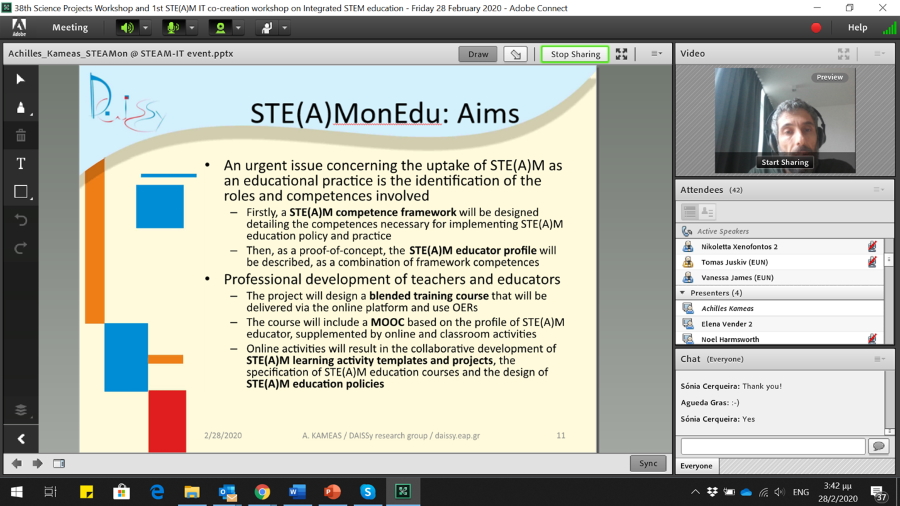 Achilles presented the aims and objectives of the STEAMonEdu project, focusing on the approach that puts teachers and educators, both from formal and non-formal education, at the center of its approach. He presented the expected project outcomes, which include competence-based tools, online tools and tools for policy makers.

All presentations given during the event will be uploaded here: http://www.scientix.eu/spw38-at-fcl.

You can find out more about STEAMonEdu:

A high-level event for policymakers, government, educators, and industry

Οn 18 February 2020, ALL DIGITAL, with the support of JP Morgan, organized in Brussels a very important event on “Individual Learning Accounts (ILAs) in the 2020s”.

OECD defines ILAs as “virtual, individual accounts in which training rights are accumulated over time. They are virtual in the sense that resources are only mobilised if training is actually undertaken”; OECD states that “ILAs were originally introduced with the objective of boosting individual choice and responsibility with regards to training and to increase competition among training providers and thus the quality and relevance of training provision.”

The new President of European Commission, Ursula von der Leyen, in her Mission Letter to Commissioner Nicolas Schmit, mentioned ILAs explicitly: “You will lead the work on implementing and updating our skills agenda, focusing on identifying and filling skills shortages and supporting reskilling as part of the just transition. You should explore the idea of individual learning accounts for people of working age, enabling adults to accumulate training entitlements and use them for quality-assured training.”

Renato Sabbadini, the CEO of ALL DIGITAL, opened the event and set the ground for the issues under debate. Then, Nicolas Schmit, the EU Commissioner himself, and OECD Director Stefano Scarpetta delivered very interesting keynote speeches. The former talked about the importance of up-skilling and re-skilling of millions of EU citizens in the next few years (“a revolution”, as he called it), while the latter presented the OECD report titled “ILAs: Panacea or Pandora’s Box”. MEP Eva Maydell, French Minister Antoine Saint-Denis, LLP Director Brikena Xhomagi and Business Europe Senior Advisor Robert Plummer participated in a panel of experts moderated in an excellent way by Hanka Boldemann of JP Morgan Global Philanthropy and debated the importance, usefulness and applicability of ILAs. Prof. Achilles Kameas, Chairman of the Board of ALL DIGITAL took the opportunity to present the role that AD has been playing in the personal and professional development of European citizens regarding digital competences, concluding that “ILAs can prove to be an important business opportunity for AD members, that is why AD is going not only to closely follow the issue, but will become an active player in the coming months”.

The event was attended by approximately 70 people, among them several EU officers, industry representatives and other key stakeholders interested in upskilling, reskilling, digital skills and professional development in general. 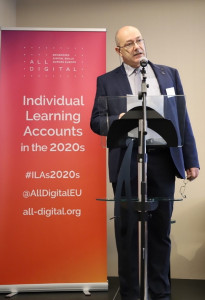 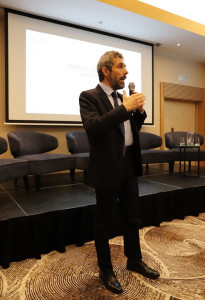 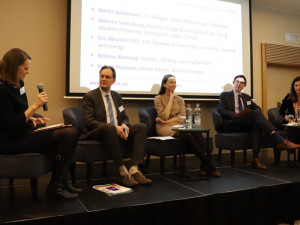 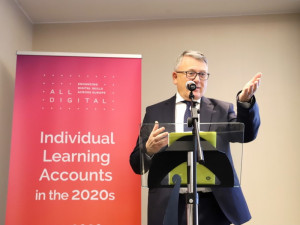 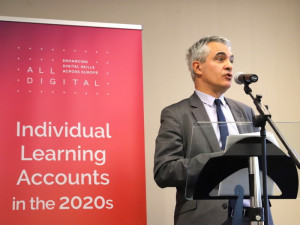 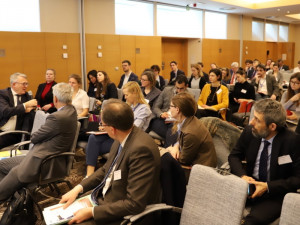 You can find out more about the event here:

You can watch a recording of the event here:

You can find out more about ILAs here:

The XENIA consortium represented by Sinapsi of University of Naples “Federico II” attended the EACEA Project Coordinators’ Meeting on 12th and 13th February 2020.

The 2-day meeting gave coordinators the opportunity to share and identify the challenges and possible solutions that could support the project implementation. In particular it was a fruitful chance to disseminate the objectives and the goals of Xenia project, enlarge the network with other colleagues from Europe and boosting the visibility of the project within Key Action 3: Support for policy reform. 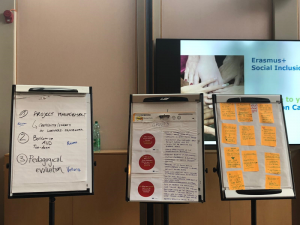 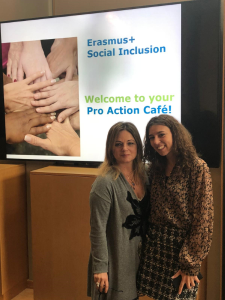 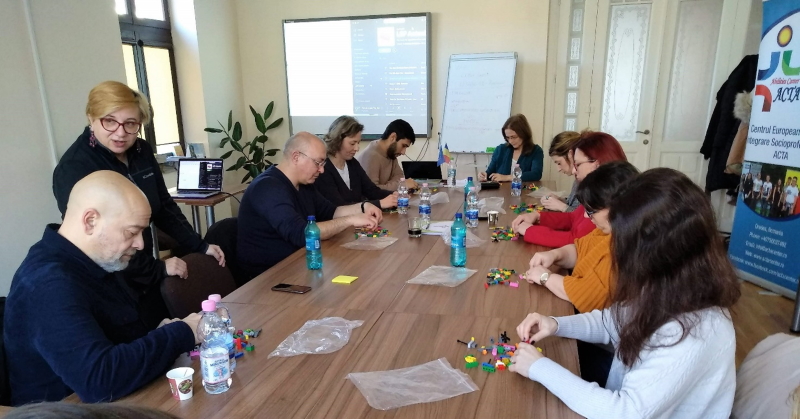 The DAISSy Research Group of the Hellenic Open University organized the Kick off Meeting of the 30 months project DELTA (Digital Excavation through Learning and Training in Archaeology). DELTA is funded in the context of Erasmus+/KA2 EU programme (Strategic Partnerships for Higher Education), and its official launch took place in Patras, Greece on November 8th and 9th of 2019.

DELTA is an EU transnational initiative that brings together 4 partners/ Universities of three countries (Greece, Italy and Czech Republic). The partnership consists of 3 Universities that have a specialization in Archaeology and excavation techniques [NKUA, MUNI, UNIBAS], while the coordinator [HOU] has a long experience in e-learning courses and in developing online platforms.

The project, which is coordinated by DAISSy Research Group of Hellenic Open University, aims to design and develop a course that combines the physical space of an archaeological excavation with the digital space of online learning. With this course, students of Archaeology will be able to improve update their knowledge and skills and develop digital and 21st century skills in particular.

In the two day meeting, partners presented their University, shared their opinions, expertise and advice based on their roles and project tasks of the forthcoming project activities. During the second day of the meeting in Patras, the participants had the opportunity to visit the New Archaeological Museum in Patras and guided by Archaeologist of Ephorate of Antiquities of Achaia (EFAACHA) in a scheduled tour, to the exhibitions and archaeological collections and findings derived from excavations in Achaia.

The project meeting closed with decisions on the next actions on Intellectual Outputs I and II.

The DELTA (Digital Excavation through Learning and Training in Archaeology) project is a transnational programme funded under Erasmus+ EU program (Strategic Partnerships for Higher Education) and is coordinated by the DAISSy research group of Hellenic Open University (daissy.eap.gr), bringing together 4 partners from 3 European countries (Greece, Italy and Czech Republic). The project started in October 2019 and has a duration of 30 months.

DELTA aims at the design and development of an open course through which students of Archaeology will be able to update their skills and develop new digital and 21st century skills. The project is innovative since it integrates the excavation site as an instructional tool in the classroom-based instruction of Archaeologists using digital means.

The course will support a blended learning process through an open, online-learning platform as well as face to face and on-site learning with a transnational mobility of students and their professors of Archaeology.

After the blended learning, selected students from each partner University with their Professor/educator will be able to be trained and work together in multinational groups and benefit from the knowledge and skills exchange in a joint excavation (Intensive Study Programme-ISP), in the historical place of Marathon, Greece.

DELTA will result in the design and development of a Teaching Handbook in four languages as well as the creation of Policy and good practices towards the application of new methods and modernization of excavation practice using the news technologies.

For more information, you can visit the website: project-delta.eu 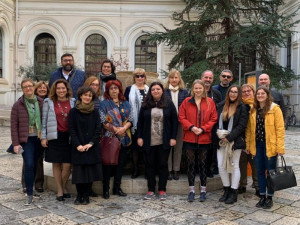 DAISSy Research Group of the Hellenic Open University participated in the Kick off Meeting of the three-year project “Boosting digital skills and competences of libraries in Europe”. BIBLIO is co-funded by the Erasmus+ Programme of the European Union under Action KA2 – Cooperation for innovation and the exchange of good practices – Sector Skills Alliances, and its official launch took place in Bari (Italy) on January 27th and 28th.

BIBLIO aims to address the skills gap in the library sector due to digital transformation. The project has been created by the consortium of 10 partners from five countries (Belgium, Bulgaria, Greece, Italy, Latvia). The partnership includes sectoral organisations – national and international library networks and organisations; VET providers, a university and two European networks in digital skills and library professionals.

During meeting, the partners discussed various work packages and challenges, defined the priorities and set the action plan for the first year. On Day 1 the partners talked about the management and communication, prepared for the needs analysis research, got introduced to the coaching circle methodology and the good practices in mapping emerging job roles, based on the experience of MuSA project. The second day was devoted to the VET curricula, MOOC design and delivery, specialisation course for library professionals, and project dissemination activities.

DAISSy Research Group of the Hellenic Open University will participate in all project Work Packages by conducting the research, developing the MOOC, piloting BIBLIO activities in Greece and contributing to the project dissemination and exploitation activities.

For more information regarding BIBLIO project and/or more news of the DAISSy Research Group: 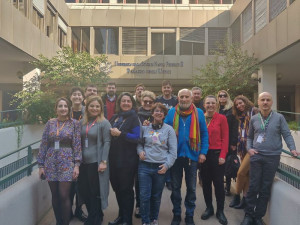 DAISSy Research Group of the Hellenic Open University participated in the Kick off Meeting of the three-year project “XENIA: HΕ Inclusiveness Index”. XENIA is co-funded by the Erasmus+ Programme of the European Union under Key Action 3, and its official launch took place in Naples (Italy) on January 16th and 17th.

At the meeting, the Partners cooperated in the planning of activities for Work Package 1 in order to define a common methodology and identify the thematic areas and indicators for the Index, which is the tool to enhance HEIs’ inclusiveness and to equip them with Tools, Case studies/Policies and Best Practices to combat gender and sexual orientation stigma and exclusion. Then, Partners outlined the details of Evaluation and Quality Assurance activities.

The Kickoff Meeting also presented a great opportunity for Partners to agree upon the web domain, the project logo and web design in order to foster XENIA’s visibility and exploitation and to launch dissemination activities, with both online and offline means to reach almost 3 million of people, the total amount expected over the three years of the project.